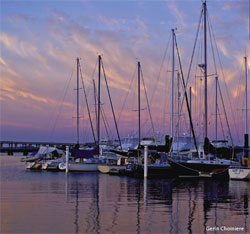 New Bern is home to numerous museums and historical sites, and one of the most popular is the Tryon Palace Historic Sites and Gardens. The former home of Royal Governor William Tryon has been fully restored to its 18th-century Georgian splendor and is furnished with an impressive collection of antiques and art. The manor's grounds contain some of the state's most beautiful horticultural exhibits, ranging from traditional English gardens to wilderness garden areas.

Not far from Tryon's historical home is New Bern's Riverfront Convention Center, a 45,000-square-foot facility that can accommodate groups of up to 1,350 people and serve banquets for more than 1,000. It also houses New Bern's Visitors Center.

If the convention center is the jewel of New Bern, then its centerpiece is 13 Flags Over New Bern. Located downtown, this arrangement of flags was created in 1973 and contains the American flag, along with the official state and town flags, in the center of a ring of 13 historical flags dating back as far as pre-Revolutionary War days.

In addition to being North Carolina's first state capital, New Bern is also the proud birthplace of Pepsi-Cola. Caleb Bradham invented the popular soft drink in 1898 in his pharmacy, calling his creation "Brad's Drink" before patenting it as Pepsi-Cola. The pharmacy is still in its original location.

New Bern is more than just a history lover's paradise. For example, the New Bern Civic Theatre presents dramas, comedies and musicals year-round. Since opening in 1911, this cultural gem has played an active role in the development of the area's entertainment and culture. The theatre has undergone numerous renovations to accommodate new trends in the industry.

With all this to offer, plus nationally syndicated boat races and dozens of public and private golf courses, it's easy to see why people are flocking to New Bern and why it has been officially designated an All-American City.