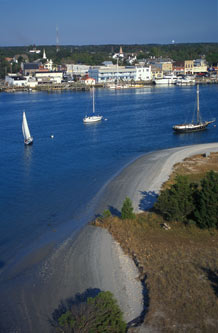 Beaufort, North Carolina, is home to popular museums and historical sites, including the famous North Carolina Maritime Museum, which houses artifacts that date back to the time of the notorious pirate Blackbeard and his crew. In fact, one of Blackbeard's most legendary ships, Queen Anne's Revenge, was discovered just off the Beaufort shores, and its artifacts are displayed in this frequently visited museum. The town's rich maritime history is still a major part of its current culture and economy.

Because Beaufort (pronounced BO-fort), could be reached only by boat for hundreds of years prior to the 20th century, the town was isolated. Today, Beaufort still offers a secure, isolated feel to those who live there. The town's predominately wooden-built homes and buildings are almost all painted a crisp white, adding to the aura of serenity and peace.

Amid the historical district are more than 100 skillfully restored homes from the 18th and 19th centuries. Majestic live oak trees line streets given their names as long ago as 1713, many in honor of historical figures such as Queen Anne, Thomas Polluck and William of Orange. A mainstay of the historical district is the age-old Hammock House, an ancient Inn where Blackbeard was once a guest and where, according to legend, he murdered many of his victims.

"The untamed Spanish mustangs, descended from horses brought to Beaufort almost 500 years ago, graze the surrounding islands and can be seen from the Beaufort shoreline."

The town is rich in maritime history and heritage, but Beaufort and its environs also boast of an astonishing array of wildlife. The untamed Spanish mustangs, descendants of the horses brought to Beaufort almost 500 years ago, graze the surrounding islands and can be seen from the Beaufort shoreline.

Today, Beaufort remains one of North Carolina's largest seaports, and seagoing vessels from every inch of the globe can be found scattered around its docks. The quaint old fishing village, friendly local residents and visitors give Beaufort the feel of a New England seaport accented by the warmth of sweet Southern comfort.